Lucky was a large black cat with jade green eyes and a long tail with a slight hook right at the end. He came into my life at a hotel in Vang Vieng in August 2015, and passed away on my living room floor late on a Friday night 3.5 years later. I’ve cared for cats all my life, but Lucky was extra special. 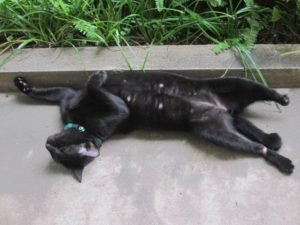 We met in bad circumstances: a pack of dogs was barking at Lucky as he hunkered down, under restaurant decking on the banks of the Nam Song river. The following day he was still there, not obviously injured but immobile. An agile teenager volunteered to rescue him. He climbed over the restaurant terrace, armed with a long pole and a makeshift noose. He managed to lasso Lucky, swing him out from under the decking, over the swiftly-flowing river, and onto the restaurant floor. It was a scene from a cartoon: an angry cat with fur standing on end, spitting and clawing. Someone told me to put a bag over the cat’s head to calm it down, and then we investigated to see if there were dog bites on his underside. What we found shocked us. Amongst the blood, faeces and urine we saw the cat’s two back legs were tied tightly together with wire which had severed blood vessels. The teenager was super-calm. He pulled on rubber gloves from a nearby sink, and removed the wire, untwisting it turn by turn. It was a bloody scene. Apart from his legs, Lucky seemed to be in good shape, so we took him to the local Vang Vieng vet for initial first aid. The verdict was that he should see a vet in Vientiane, and would possibly require a double amputation. Days later I discovered that one of Lucky’s four fangs was also missing – maybe from trying to bite off the wire. I named him Lucky because it seemed he was lucky to be alive. 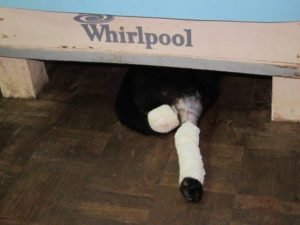 Lucky’s rehabilitation started the next day at Dr Khamdeng’s clinic in Vientiane. The deep wounds on his legs were cleaned and bandaged. And then for the next three months we made regular visits to the clinic for his bandages to be changed. At first, we visited daily, and then once every two days, every three days, every four days, etc. Within the first week, one of Lucky’s injured legs was amputated, but the other leg healed, although it had deep scarring and fur never grew back where the wire had been.

But Lucky’s rehabilitation was not only physical. It was also mental and emotional. After his traumatic experience, Lucky was in a lot of pain and afraid of humans. For the first two months he hid, silently, under the fridge in my kitchen. He came out only at night to sleep on a cushion on the living room floor, after he was sure I was in bed. One evening I was up later than usual. I still remember seeing a cautious black furry head peer around the kitchen door to see if the coast was clear for him to retire onto his cushion, and then retract as soon as he saw I was still in front of the television.

Getting Lucky into the cat carrier for each vet appointment was stressful for both of us. I could not drag him out from under the fridge – he was still a wild, angry cat who would not let anyone touch him. So the night before a vet visit I would go to bed, wait for him to limp out to the floor cushion in the living room, and then I would get out of bed to close the kitchen door so he could not return to hide under the fridge. The next morning I would follow him around the house, attempting to corner him and cover his head with a towel, which allowed me to pick him up and put him into the carrier without being clawed. I was afraid every time, with adrenalin coursing through my veins, but knew it was necessaryfor Lucky’s recovery.  Wrapped in a towel was also the only time I could handle him, and pat him. During these days I occasionally wondered why I had made the snap decision to take care of this cat, who required so much care but was returning no affection at all. 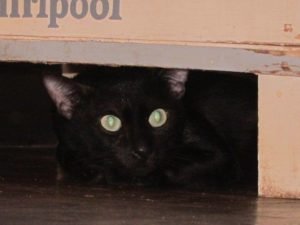 But gradually Lucky softened … probably as his injuries healed. After 1.5 months under the fridge, he started to peer out into the kitchen, and occasionally made cat sounds. After 3 months he felt safe enough to sit – and sometimes sleep – in the same room as other people. I gradually got closer to him, and finally was able to stroke his paws, which allowed him to keep my hands inview at all times. He was still fearful if I tried to stroke his head or his back. Finally in December 2015 – 4 months after his accident – Lucky’s bandages were removed, and he allowed me to pat him and even pick him up. I arranged for him to start his vaccinations, and to be desexed. Unfortunately, he had to wait in his carrier for his operation at the vet clinic, and when the vet opened his cage Lucky lunged at the vet, attacked her and left a deep fang scar on her wrist.

With his bandages off, Lucky began to explore the garden. One day, he even climbed a tree! I put a little green bell on his collar so I could always hear where he was. I was concerned that he might wander off, and not be able to defend himself against dogs or other male cats as well as an able-bodied cat could. He ate well, slept in the garden, got along well with my other cats, and made a distinctive warbling meow, but did not purr or seek affection. 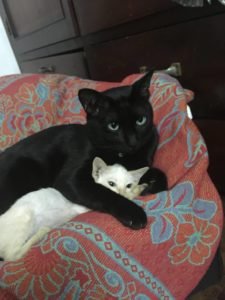 I saw a new dimension to Lucky when, one day, I brought an abandoned kitten home from the temple. Lucky mothered this kitten in a way I had never observed a male cat do. He licked the kitten clean, let it cuddle up to sleep with him, and indulged it in play. The kitten would jump on him, attack his tail, and then run away. Lucky chased this kitten around the house, and taught it how to play-fight. It was so sweet to see Lucky, this adult male amputee cat playing with a tiny kitten.

Twenty-seven months after Lucky came to live with me, he started purring. It happened on our first night in a new house. I had walked to the kitchen to get a glass of water of water in the middle of the night, and picked up one of the cats in the darkness. I was pretty sure it was Lucky, but because the cat purred, I doubted myself. But over the next few weeks, Lucky purred more and more often, until it became normal behavior for him.

In the final six months or so of his life, he developed a habit that I dubbed “love attacks”. He would walk across my bed, often when I was reading, doing his funny warbling meow. He would then head-butt me, nuzzle up against me, and purr loudly. Of course, this is normal behavior for many cats, but for me and Lucky this was very special because our relationship had started out with so much pain, fear, and silence. 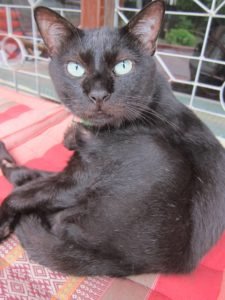 Lucky died quite suddenly on 01 February. He had a blood test a week prior, which showed his kidneys were barely functioning. I canceled all travel commitments, so I could spend as much time as possible with Lucky, knowing that his days were numbered. I buried him in the garden the day after he died. He was a beautiful cat – who taught me valuable lessons about how to be brave and patient.

Editor’s Note:  If you have an inspirational story about a pet, please let us know.  We’d love to share it with everyone.  Email us at info@vimaansuan.com